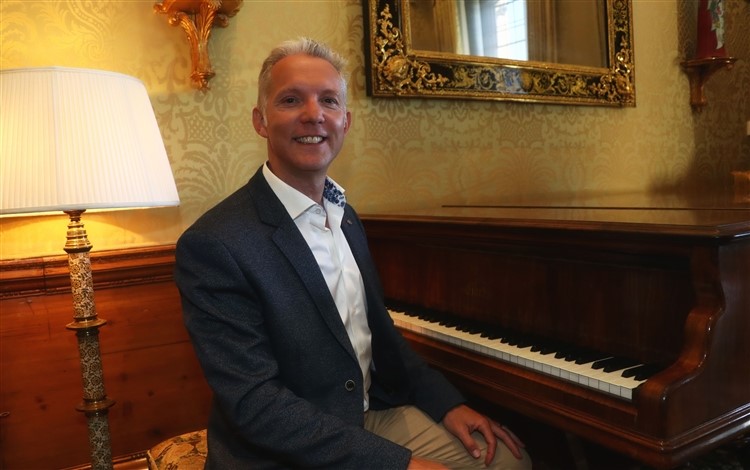 Tom was born in Torquay, Devon – the youngest of six children. Music was an interest from an early age and he played the cornet in local brass bands and classical piano for pleasure. Deciding to make a career in music, Tom joined The Royal Marines Band Service and during a successful career as a musician, he travelled extensively, performing in many venues worldwide.  He also worked as a piano and trumpet teacher and it is at this stage that he gained valuable experience as a mentor and conductor and was privileged to meet world renowned musicians, such as Tasmin Little, Peter Donohoe and Marin Alsop.

Tom’s interest in music widened when he studied arranging, composition and conducting with the Royal Marines.
He was awarded the silver medal of the Worshipful Company of Musicians in recognition of his musical talent and in June 2012
Tom reached his career pinnacle when her Majesty the Queen appointed him a member of the Most Excellent Order of The British Empire (MBE) for his contribution to the Royal Marines. Tom now works as a freelance composer, orchestrator and musician, writing and composing for a variety of musical events. He was recently commissioned to compose an extensive work for the upcoming Leeds Castle Classical Concert on 13th July 2019.

More recently, Tom’s music was performed at the D-Day 75th Anniversary Concert in Portsmouth, attended by Her Majesty the Queen and the President of The United States

He is currently working with a variety of organisations including The Royal Edinburgh Military Tattoo.

Why MD of The Southdowns band?

The Southdowns Concert Band is , in my opinion, the leading concert band in West Sussex and it is a privilege to work with a great number of musicians of all backgrounds, from “ hobbyists” to “ side hustlers “, music teachers and retired professionals. What brings us all together is our love of music and performing

Which side of the conductor’s stand?

I enjoy both sides. For conducting, it is rewarding to take a rehearsal and hear the improvement, it can be hard work with lots of preparation for both rehearsals and concerts, but the satisfaction of a note-worthy performance is worth the effort. On the band member side , I enjoy playing the dots and striving to achieve my own personal best performance.

Again, tricky to pick just one! Right now it is “ Shotgun” by George Ezra. Mainly because I smile whenever I hear my six year old singing all the words…. I have no idea how he has learnt it– certainly not from me !!

Which instruments do you play?

I started trumpet when I was very young, then moved to piano, which is where most of my professional career was focused, retuning to trumpet about five years ago, I’m really enjoying playing in a number of ensembles.

Favourite concert band piece of music of all time?

One that I really enjoy conducting is an orchestral transcription by Butterworth of–”The Banks of Green Willow“, beautifully written. Also “ An American in Paris” was real pleasure too. However, from the original wind band repertoire, it would be Stravinsky’s “Symphony of Winds” at one end of the spectrum, and Holst’s“ English Folk Song Suite No.2” at the other. I have lots of favourites.

If you could be any car what would it be?

It will be an old classic. An Austin Healey I think, sleek, sophisticated and in reasonable condition for an older model… Just need to make sure you keep the fluids up…. Red wine usually does the trick.